James “Jim” Baker was born in Hazelhurst, MS but his family moved to the Mississippi Gulf Coast when World War II broke out. Jim’s father was a merchant marine and his mother a teacher. As a child, Jim attended Gulf Coast Military Academy, a West Point Honors Military Academy originally located where AFRH-Gulfport now stands. Jim recalls being at the Academy and hearing the news that his father had finally made it home safely from one of the Murmansk Runs. He was so excited to see his father that he walked all the way home to Ocean Springs. In the meantime, his father and mother had driven to the Academy to see him. He had to walk 100 hours in the bull ring as punishment for being AWOL. While serving his punishment, he was scouted to compete at the state swim meet. He eagerly accepted knowing that his training would get him out of walking the bull ring. He ended up winning first place at the state swim meet.

Jim’s education from Gulf Coast Military Academy prepared him for a career in the Navy. He entered when World War II was ending. Working in food service and supply, he started his career by working on a PCE (Patrol Craft Escort) and the USS Bataan. He was then trained to work aboard submarines, both diesel and nuclear. His duty stations and time at sea took him all over the world to such locations as North Africa and Europe. He retired as a Chief, inspecting submarines at SubPac out of Pearl Harbor. During his career, he earned many awards such as five battle stars for his efforts in Korea. The award he says he is most proud of is the personal award received from the Secretary of the Navy for SubPac Staff. After his military retirement, he entered the civilian workforce holding a variety of jobs including Sheriff of Marion County, AK and inspector for the USDA.

Jim has three sons, one of which carried on the Navy legacy and became a Seabee. He is also the proud grandfather of five grandchildren, four boys and one girl. 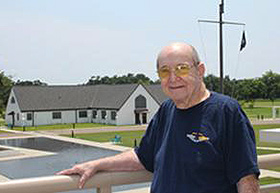