Chief Warrant Officer Wood was born in a small community in Orr, Oklahoma. One day a dust storm literarily blew his family out of Oklahoma. His father had an oil field and farming properties but when the storm was over they had nothing. The family drifted to California becoming migrant workers.

After two years of high school in California, Hobert had had enough and joined the Navy to educate himself and that he did. He passed his GED qualifications while in the Navy. He considered himself and so did his senior officers, to be the best darn “Diesel Mechanic in the Navy”. Once he completed his High School GED, Hobert was promoted to the Navy School Command where he taught courses on Centrifugal Compressors Engines used in Navy boats. Here at the Navy School Command is where he was also promoted to Warrant Officer.

Hobert had five brothers and one sister and he was a middle child. His father was his ideal for he could communicate with others at any level and was well liked. Hobart is the same way. Hobert’s son feels the same about Hobert; he thinks his father is the greatest. He, like his grandfather, is one of the greatest storytellers in the world. He could have become a great comedian or inspirational speaker. Chip or “Chippie John” was born in Japan and the housekeeper thought he was a “chip off the block” and named him Chip. When I met Chip, he expressed his love and admiration for his father in such a heartfelt matter, I almost cried. Hobert and his deceased wife Shirley Collier Wood were the proud parents of two children Chip and Shelliene.

During his Navy career he was stationed in Scotland, Guam, (his most favorite home port) and he had his personal 64 foot rescue boat that he used for fishing. He fed all of his neighbors fish. His first (and favorite) duty station was Kwajalein Island in the South Pacific. He spent many of his days working in Treasure Island, California, stationed there for two years, and was at Great Lakes Navy School in Illinois for two years. Long Beach, California is where he was stationed longer than any place else.

After retiring from the military he worked for Ingersoll Rand Company in Green Bay, Wisconsin, and he was transferred to Baton Rouge, Louisiana, where his son and daughter live at this time. Both of his children graduated from LSU. His Vietnam years were filled with dangerous combat operations. He was part of the Brown River Operations and Mekong Delta, Delta River Patrol Group. 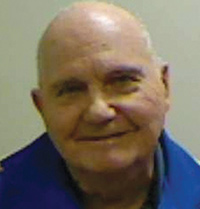 He received a citation for meritorious service while serving with friendly foreign forces engaged in armed conflict against the Communist Insurgents (Viet Cong) in the Republic of Vietnam from June 1967 through May 1968. As the Logistics Officer for River Section FIVE HUNDRED THIRTY-THREE, Warrant Officer Wood was responsible for maintenance of ten River Patron Boats. He was a qualified Patrol Officer and spent many hours directing the My Tho, RVN, based PBR’s during emergency sorties. Through Warrant Officer Wood’s leadership, the boat was returned to duty in a minimum amount of time. While with the Patrol Group they encountered the enemy daily in an ever-continuing, ever-intensifying struggle for control of this vital area. Some of the battles waged by the Patrol Group were the fieriest engagements ever fought in the Mekong Delta. President Richard Nixon took pleasure in presenting his Presidential Unit Citation to this Group. Warrant Officer II Wood received many other citations including one from President Johnson.