Frank Haney was born on August 30, 1924 in the Delta region of Mississippi in the town of Friars Point. His father worked for the city of Clarksdale and his mother was a housewife. Some of his fondest memories of growing up in the Delta are working at his first job. At age sixteen, he delivered groceries by bicycle earning $1 per week. He later worked at a bakery in town.

In 1943, Frank and a few of his closest buddies were drafted into the military to fight in WWII. He was sent to Army basic and tactical training at Fort Sill, OK. The Army trained him to be a cook and baker and he was assigned to the 100th Division. His division did a winter time maneuver before being sent overseas in April 1944. Theirs was the first convoy to land in Marseilles. At the time, the Germans were retreating and his division followed them up and shelled them. Then the division got held up in a citadel near Collège de Bitche (as a joke, they had an organization called “Sons of Bitche”). Here, they battled back and forth with the Germans. Unfortunately this wasn’t the only combat he saw. He spent a total of nineteen months in combat.

After the war was declared over, he was sent to Berlin. He said Berlin was in shambles. He was put in charge of the dining hall and named Service Supervisor. When he left Berlin in 1946, his rank was Sergeant First Class. 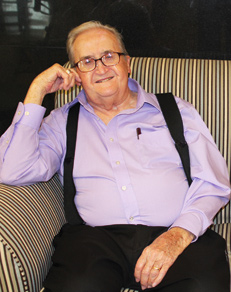 Arriving back in America by ship, Frank decided to get out of the Army but was still in the Reserves. Before too long, he was activated with the Army National Guard for the Berlin Crisis staying a couple of years. After he left the Army National Guard, he enlisted with the Air National Guard. Working for the Air National Guard, he was chosen to supervise the dining hall and barracks at Gulfport Field. His rank by this time was Master Sergeant. Upon leaving Gulfport Field, he went to work in food service at Keesler Air Force Base. After devoting 32 years to military service, he decided to retire in 1984.

When questioned whether or not he was married, Frank answered, “That’s the most important part!” He met his wife in 1951 when he was set up on a blind date. He said it was love at first sight. They were married in 1954 and eventually had two sons and one daughter. His family has lived in Gulfport since 1962. Tragically, one of his sons died at the young age of fourteen from a cerebral hemorrhage. Frank also lost his sweetheart in 2005. His son and daughter have definitely made him proud. His daughter, who is a retired school teacher, works for the Department of Education. His son is a state representative for Mississippi. Between his two children, he has five grandchildren and one great-grandchild.

When asked if he enjoys living at AFRH-G, he replied, “This place is a blessing.” He also spoke of his experience in the Army saying, “The Army taught me how to live. That was the blessing the Army gave me.”