In 1953 Francis Symans enrolled at the University of Alabama and majored in “girls” and minored in engineering. After two years he decided that college was not the best thing for him. He returned to Dunkirk, New York where he went to work for his father, who owned an excavating business. After a while of working for his dad, he got “itchy” and decided to enter the U.S. Navy Seabees as a heavy equipment operator. After 3 ½ years he left the Navy to work for his father again. He then met his darling wife, Marilyn, and decided to get married. He wanted to provide security for his wife so he joined the Army Combat Engineers, where he became a heavy equipment operator in Germany. Francis stayed in the Army for 3 ½ years and discharged as a staff sergeant. Two months later he decided to join the Air Force as a heavy equipment operator. He looked around and everybody who was wearing “wings” had more stripes than him, so he became an in-flight refueling technician. In 1969 Francis was grounded due to his loss of hearing from exposure to loud noises. He then became an Air Force recruiter in Flagstaff, Arizona. While he was a recruiter young men would ask him which branch of service is the best? His reply was, “If you want to have fun, join the Navy, if you want to make money, join the Army and you will make proficiency pay for digging a ditch, and if you want to go home in the evening to be with your family, join the Air Force. He retired from the Air Force in 1972 after 12 years of service. He has a total of 27 years in three different branches of the military.

His favorite duty assignment was at Castle Air Force Base in California, where he was an in-flight instructor for boom operators. A boom operator flies on his stomach and “passes gas” to the receiving air craft. When asked what he liked most about being an in-flight instructor he replied, “I like teaching new guys how to fly the in-flight refueling boom. I enjoyed seeing people who had no experience become a qualified in-flight refueling technician.” During Vietnam he was stationed in Thailand and was responsible for refueling Fighters and Bombers. He said, “I received a distress call over the airways from an F-105 fighter bomber that was low on fuel over North Vietnam. The crew went and met him over North Vietnam. We did a careful “hookup” and towed him back to South Vietnam and dropped him off at the DaNang Airport where he coasted into land and everything was just fine.”

After retirement Francis became an industrial electrician for 22 years in Flagstaff, Arizona. Francis said his favorite branch of the military was the Air Force because he could be home with his wife and children at night. He was married to his wife Marilyn for 52 years and they had three children.

Francis moved into AFRH-G in August of 2014. He said he likes the combination of the Armed Forces Retirement Home’s building and the people. He stated, “The building is so well put together and the people are just so nice. I absolutely love living here. This place is magnificent!” 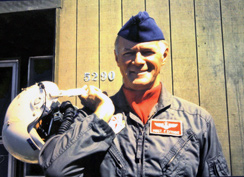